On November 16, 2012, artist Phil Taylor will present our family with a portrait of Mark at a special ceremony at the new Veteran and Military Affairs Building at The University of Alabama. This has been in the works for well over a year and we are grateful to Phil for sharing his talent with us. He spends much of his time painting portraits for the families of our fallen heroes. In fact, he presents them all over the country every week. His portraits capture the heroes in a moving way, especially in their eyes.

Here are the details of Mark’s presentation: 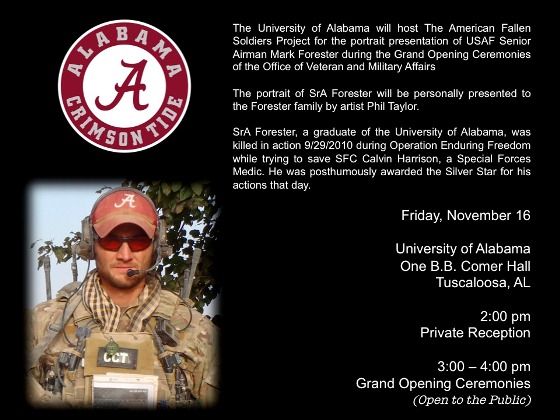 To see an example of what Phil does, click here.

According to Phil, the video below sums up “who we are, how it started, the process, and effect on families”…

To give an idea of how Mark’s ceremony will be, below is a ceremony from an event honoring Navy SEAL CPO Brian Bill:

Phil has recently been nominated for The Rare Life Award, which is given to those who exhibit Courage, Leadership, Survival, Heroism, Devotion and/or Character. He has been nominated for his devotion and commitment to bringing comfort to the grieving families of our fallen military men and women through his paintings. To learn more about this and to vote for Phil, click here.