How Mark Forester Won The Bronze Star with Valor 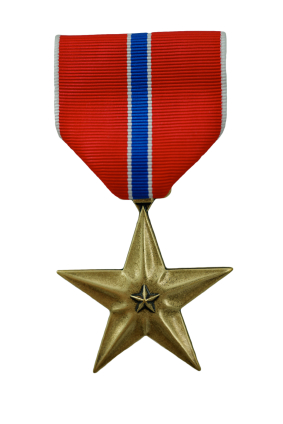 This award was presented Mark’s parents at the Pope Air Force Base Services in his honor. The family feels it appropriate to publish the Citation of Award here. The Award Mark earned has a little “V” on it for displaying heroism in combat, but I couldn’t find a good picture of one, so this will have to do for now. This is a digital copy of the Citation and I have typed it out for those of you who may not be able to read the text. This is the Battle that took place on Aug 6th 2010. 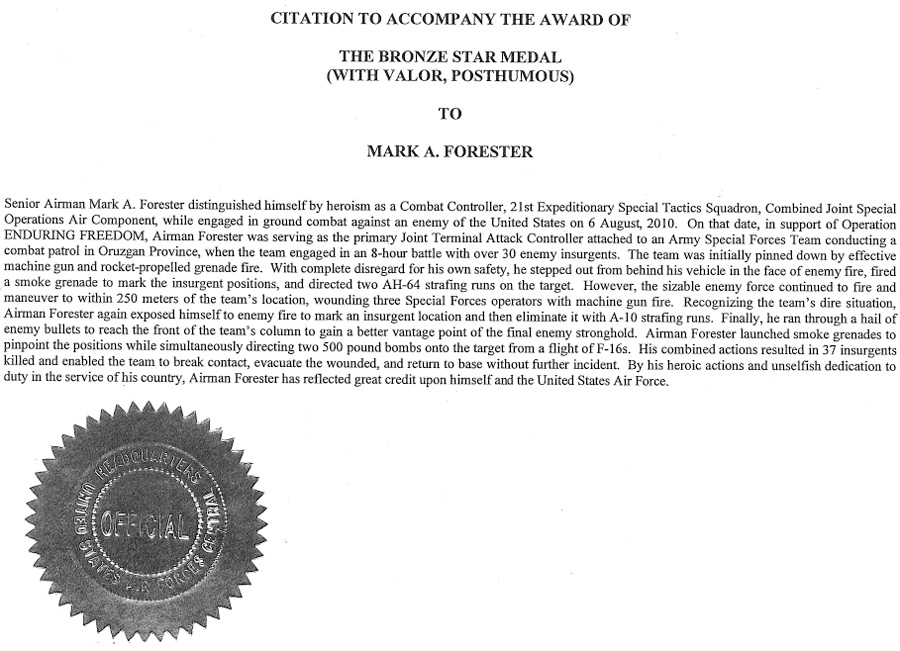 Senior Airman Mark A. Forester distinguished himself by heroism as a Combat Controller, 21st Expeditionary Special Tactics Squadron, Combined Joint Special Operations Air Component, while engaged in ground combat against an enemy of the United States on 6 August, 2010. On that date, in support of Operation ENDURING FREEDOM, Airman Forester was serving as the primary Joint Terminal Attack Controller attached to an Army Special Forces Team conducting a combat patrol in Oruzgan Province, when the team engaged in an 8-hour battle with over 30 enemy insurgents. The team was initially pinned down by effective machine gun and rocket-propelled grenade fire. With complete disregard for his own safety, he stepped out from behind his vehicle in the face of enemy fire, fired a smoke grenade to mark the insurgent positions, and directed two AH-64 strafing runs on the target. However, the sizable enemy force continued to fire and maneuver to within 250 meters of the team’s location, wounding three Special Forces operators with machine gun fire. Recognizing the team’s dire situation, Airman Forester again exposed himself to enemy fire to mark an insurgent location and the eliminate it with A-10 strafing runs. Finally, he ran through a hail of enemy bullets to reach the front of the team’s column to gain a better vantage point of the final enemy stronghold. Airman Forester launched smoke grenades to pinpoint the positions while simultaneously directing two 500 pound bombs onto the target from a flight of F-16’s. His combined actions resulted in 37 insurgents killed and enabled the team to break contact, evacuate the wounded, and return to base without further incident. By his heroic actions and unselfish dedication to duty in the service of his country, Airman Forester has reflected great credit upon himself and the United States Air Force.

We were also able to track down where that very cool picture of Mark came from. Mark had a few point and shoot cameras, but there was a huge problem with dust and on one occasion he jumped into a river which ruined another. He needed something water proof, dust proof and shock proof, so I sent him on of these- Olympus Stylus Tough Camera.

Somehow the card from that camera made it back with Mark and arrived safely to his family. We looked through that card today and found several very interesting pictures. This is one of my favorites of Mark and I ran it through Paintballer Pro:

This next picture is probably the last picture that Mark took alive. It is the last picture on the card and was taken on the day he was killed around 10am in the morning. There are both Afghan as well as other US Special Forces soldiers there. This brings a smile to my face, there he is, in a war zone, taking a breather to pose on a moped and smile. 🙂 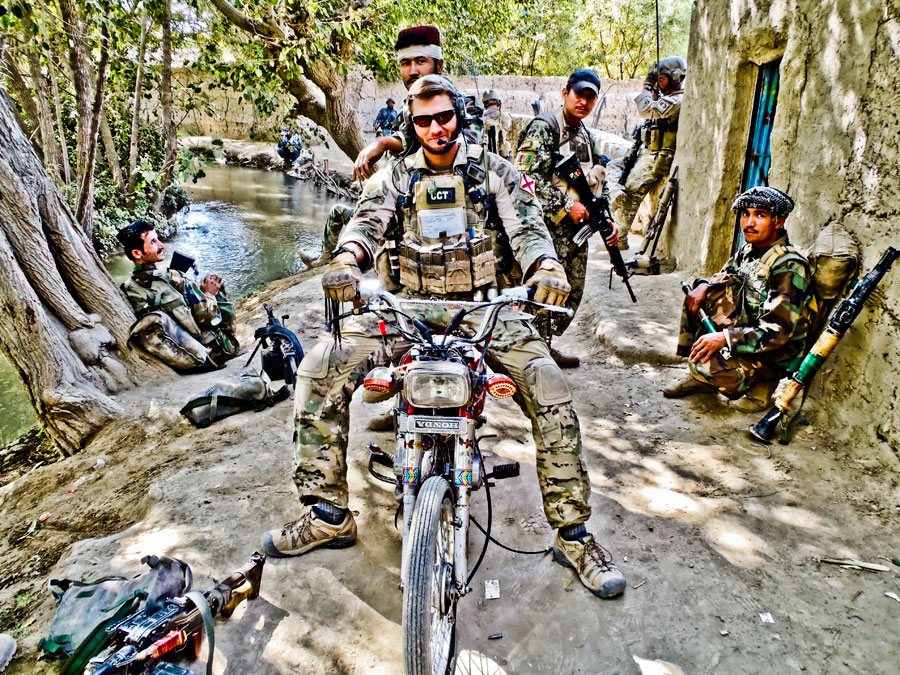