Mark’s biography, My Brother in Arms is now available. The ready date is September 29, 2013, which is the third anniversary of Mark’s death. Books have already begun shipping and some readers have already finished reading the book.

**Now available on the Kindle via Amazon.com. Click HERE for the direct link to download for your Kindle now.**

Hardback, iPad and Nook versions will be available in the near future, but only paperback is available initially. My Brother in Arms can always be purchased here on Mark’s web site, as well as Amazon. However, we prefer books to be ordered thru the web site. If you have orders for more than quantity of 1 book, please contact us by clicking the ‘contact’ link along the red banner near the top of page.

Click below for easy purchase via PayPay or credit card. There is also a static purchase link near the top of this page, to the right of The Price of Freedom. Thank you for your support of Mark, our family, and his foundation. 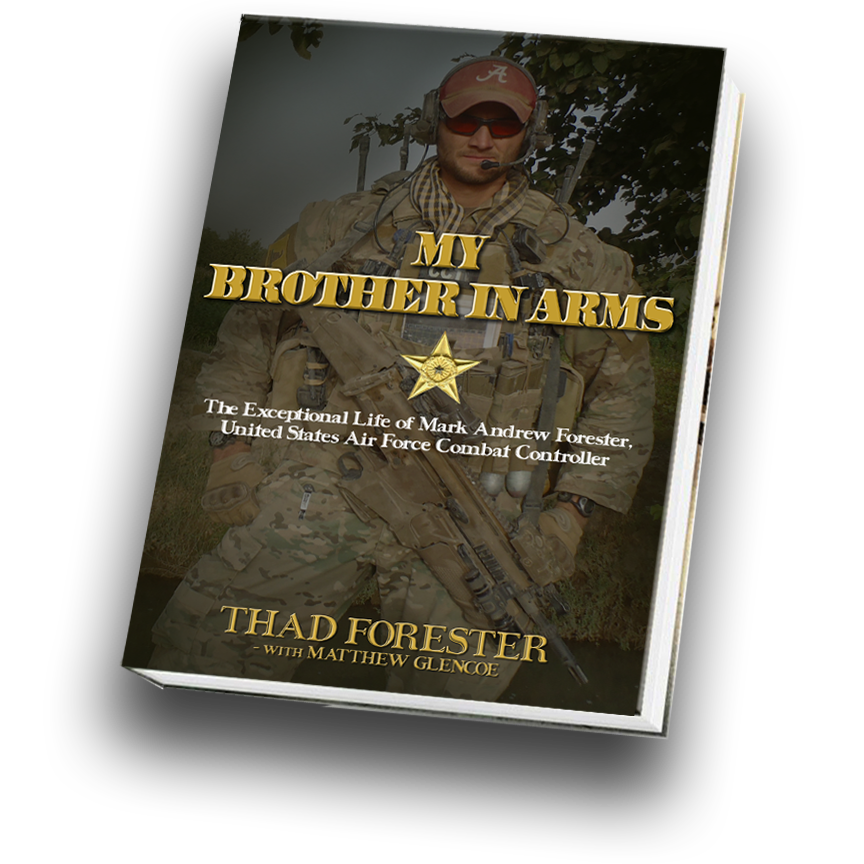 Here is a summary of the book:

On September 29, 2010 my brother, Mark Forester, was KIA while fighting terrorists in Uruzgan Province, Afghanistan. However, his heroic legacy of being shot down while preparing to rescue a fallen teammate began long before this tragic day.

An Apache aviator said of Mark’s final battle: …”I have never witnessed such an act of heroism in my three years of fighting in combat. I have over 2,700 hours total time with 1,500 hours of combat time in both Iraq and Afghanistan…JAG 28 continued to advance on the enemy while taking intense enemy fire, and continuously fired his weapon in an attempt to get to his fallen teammate and destroy the enemy.”

Mark chose to enlist in the Air Force as a Special Operations Combat Controller after he received his Bachelor’s degree from The University of Alabama. Because of his above average grades and near-photographic memory, his Business Finance degree would have done him well. But, he felt a higher calling; one that put him between us and the enemies bent on our destruction.

Mark is the youngest of five children. He is my younger brother and I write from that viewpoint. We were the youngest in the family and he was my best friend. There are few things in life that I can speak of with total confidence and conviction—my little brother is one of them. Mark’s military career was only a small part of his life, so this book doesn’t highlight just the last three years of his 29 years on earth, but I’ve tried to capture his entire life. From his family environment, to his spiritual beliefs, to his trials, and then to his physical talents; these all prepared him to face the most violent battles in one of the most violent areas of the world.

Since his death, our eyes and hearts have been opened to multiple examples of selflessness and patriotism by meeting his teammates and leaders in the military. We have witnessed first-hand their ability to turn off their stern, professional personae and turn on compassion, love, support and acceptance. I feel a strong desire to Honor our Heroes. This book highlights one hero, SrA Mark A. Forester, and also helps recognize many other men and women who volunteer to fight for our freedom.

My Brother in Arms is not a memorial in print, but a biography for continuing Mark’s legacy of perseverance, determination and accomplishing our missions on earth. We each have different missions, but what’s important is for each of us to recognize ours and work to accomplish it. In the end, don’t we all want to go out while moving forward?

Below is the back cover. 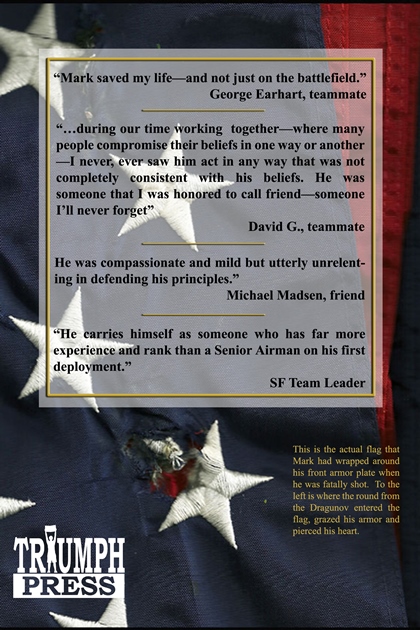